Anything That Moves Me 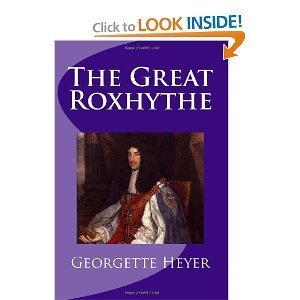 The Great Roxhythe
The Great Roxhythe (TGR), Georgette Heyer's second published novel, is an astonishing work of historical fiction, with two unconventional love stories at its center. It's a difficult book to review, as issues of writing "quality," by a precocious author writing in a time and place very different from ours, are irrelevant to the book's virtues. Heyer's style--conversational, with dialogue frequently used as exposition--was a familiar and accepted style for fiction in the 1920s and 30s, and there's little point in criticizing it for not meeting modern standards of literary snobbery. TGR is a thrilling example of this young novelist's masterly technique, mirroring the historical events of the setting in the narrative of the central characters' lives. On a more intimate level, TGR was a deeply moving story. It stayed with me, so that days after finishing it I was still experiencing that odd little leap of the heart, that mix of sadness at the ending and excitement at the pleasure I had had in reading it, which only the most extraordinary novels can produce.

The story takes place during the reign of Charles II, who returned in 1660 (the Restoration of the Stuart monarchy) from exile after the Civil Wars of the 1640s, the execution of his father, Charles I, in 1649, and the Interregnum of government by Parliament and Oliver Cromwell in the 1650s. At their core, these events are steps in the transition from a pre-modern form of government, absolute monarchy and the personal loyalty it requires, to parliamentary democracy and rule by "the people," that puts loyalty to country above loyalty to one individual. Charles, intelligent, promiscuous and cynical, was determined never to "go on his travels" again. He would do whatever it took to stay in power, while attempting to rule unobstructed by Parliament in a way that was no longer feasible.

Now, seven years later, David, Marquis of Roxhythe, is Charles's most devoted subject. His love for Charles, would-be absolute monarch, is absolute, a conflation of the personal and political that defines the nature of absolute monarchy. At a time when the causes of "king and country" are not necessarily one and the same, in any conflict between Charles's interests and those of England, Roxhythe will side with Charles. He routinely undertakes missions on Charles's behalf that could be called treason against his country. But a new love interest arrives in the person of Christopher Dart, a young man from a Parliamentarian family who becomes Roxhythe's secretary. For years, Roxhythe shields his naïve protégé from the reality of his work for the king, until the ugly truth inevitably emerges.

The story is far more nuanced than a simple black and white morality tale. Roxhythe's love for Charles may be indifferent to the ideals of Right and Wrong, but it is also "pure," disinterested, looking for no political or monetary advantages. By contrast, the supposed selfless patriots of the Country party are portrayed as unprincipled schemers. If absolute monarchy demands personal loyalty divorced from the greater good, parliamentary democracy encourages sordid politics, every man working for his own interests.

Of all Heyer's works, this is the most openly homoerotic story, and the character of David Roxhythe is the missing link in the evolution of Heyer's dangerous, morally-challenged and all-powerful rakish antihero from Tracy Belmanoir, Duke of Andover, in The Black Moth, to Justin Alastair, Duke of Avon, in These Old Shades. Of course, a story does not have to be explicitly sexual to be homoerotic: here it's about men's emotional attachment to each other. In those other books, whatever hidden homoerotic elements they may contain, there is a central heterosexual romance, but in TGR no women come between the men. Heyer takes pains to show Roxhythe as sexually active with women, in the rake's preferred mode, affairs with married women. But there is no affection there, and certainly not love. The longest affair of this kind, with a young woman frequently referred to as a "child," is notable primarily for the contempt Roxhythe feels for her and her understandably jealous young husband. The only women Roxhythe cares for are Charles II's beloved youngest sister (I rest my case), Henrietta Anne, married to Louis XIV's brother; and his cousin, Lady Frances Montgomery, a typical Heyer female of the admirable kind: smart, witty, a match for any rake but too sensible to fall for one, happily married to a decent man.

Was Heyer aware of the homoerotic nature of this story? It certainly reads as if she was. "Looking back, he realized how much Christopher meant to him…. In some vague way, Christopher's presence was necessary to his happiness," Roxhythe reflects before sending him on the compromising mission that will destroy their relationship. "…since I have been with Roxhythe he has had all my love. He has it still. There will never be another in his place. I'm a weak fool--but oh … I want him so much!" Christopher says to Lady Frances after he has left Roxhythe's service. Later, Lady Frances uses even more explicit language to Roxhythe: "You have sacrificed truth, honor, patriotism for man. …always it will be a weakness—a shame!" and "[Christopher] fought against losing his honor, his manhood, even as you must have fought, long, long ago. You gave way to inclination; Chris won his battle. He would not sacrifice all that was right and true for one man." Over time, "Slowly the ache within [Christopher] died…. He grew stronger, more virile, less morbid."

It was in the late seventeenth century that the concept of same-sex attraction as an orientation, not simply sexual acts, was beginning to develop. For the next three centuries, homosexuality and homosexuals were visible, crimes committed by criminals (a "weakness," a "shame"). In Heyer's time, sex between men was still shameful, but "pure" love could be admired. In the same way, the seamy politics of the Restoration era were beginning to tarnish the romantic luster the Stuarts held for Heyer and most of her generation. Significantly, the man that Christopher eventually chooses to serve, William of Orange, who became William III of England after the "Glorious Revolution" of 1689, was also same-sex oriented. Heyer's depiction of William is that of a cold man of the highest moral caliber, the opposite of the louche, charismatic, heterosexual Charles. And in one of the later scenes in the story, a comical exchange between the Duke of Sunderland and his wife clearly shows that Heyer was aware of Sunderland's likely involvement in a scandalous homosexual relationship, based on letters that appeared after his death. Heyer knew what she was doing, and it's possible that this, more than concerns about the quality of the writing, was behind her desire to restrict the reprinting or republication of her novel.

This book is a treasure, and a great Thank You is due from Heyer fans to Jennifer Kloester, Heyer scholar and biographer, for drawing new attention to this overlooked work--and who may be responsible for its rerelease now. Rather than worry over Heyer's possible posthumous upset with our modern rediscovery, let's celebrate instead that this beautiful story has survived to a time when men no longer have to feel unmanned by their love for each other, or equate same-sex desire with dishonor. Like many successful genre writers with ambitions to write "literary" fiction, Heyer was always hoping to give up her bestselling romances and concentrate on serious historical novels. But it was in her love stories that she displayed her greatest gifts. Modern readers may not give two hoots for the machinations of Charles II's court, but Heyer's skill as a writer of romance creates characters and situations that move readers and make them care. As Christopher says, "If you think any harm done to me could kill my love for Roxhythe, you do not understand love."