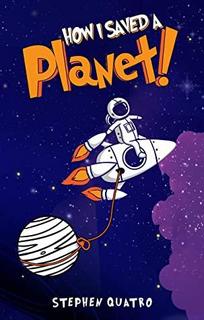 If Madeleine L'Engle's A Wrinkle in Time and Norton Juster's The Phantom Tollbooth spent a dirty weekend (as the Brits say), Stephen Quatro's How I Saved a Planet would be the lovechild. These books share a playful, gentle morality wrapped in a tale of alternate universe or space travel, generously laced with wordplay and witty dialog. Quatro's language abilities are astonishing, with puns, anagrams, cryptography and linguistic jokes throughout--even a few nonsense poems.
As Planet begins, the narrator, home for a boring summer after his first year of college, is terrified by a pair of giant eyeballs peering in his bedroom windows. The eyes belong to a size-shifting, scaly-blue-skinned alien named Qarl (not Carl. "I can tell you're not pronouncing the Q") but our intrepid narrator is easily convinced to go off with this stranger, despite his mother's warnings, because Qarl has candy. Milky Ways, naturally.
In the course of the characters' journey across the universe on a quest to save the planet X@X, readers are introduced to the idea of haggling up, where customers try to pay more and sellers try to reduce their price because money is a necessary evil and people want less of it; to the polite planets (the largest is Adanaq), worlds of pleasant trees and nice cities; and to the planet Hob, guarded by Hob Goblins that look like hairy baked potatoes. Still, as the narrator learns, "your mom" jokes are universal. And the Elixir of the Damned turns out to be … ginger ale.
Like Tollbooth, with its feud between the language-oriented Dictionopolis and the mathematical Digitopolis, and whose narrator, Milo, begins his journey in a state of boredom, Planet explores the way familiar words and phrases can be turned inside-out to produce multiple and contradictory meanings, and how language signifies morality and vice versa. And like Wrinkle, with its Mrs. Whatsit, Mrs. Who and Mrs. Which, who are and are not quite witches; with its Happy Medium personified in a laughing clairvoyant with a crystal ball; and its horrifying Thing of tangible Darkness battled by stars giving up their life and light inheroicbattle, Planet provides a minimal "sci-fi" framework for a story of rescue and redemption.
Quatro's book isn't as profoundly Manichean as L'Engle's, but there are serious moments among the levity, especially in the area of gay or queer (Q). Qarl and the narrator are like a pair of bitchy queens, arguing and squabbling but ultimately becoming friends. "Did I come into your house and just start touching things?" "Actually, you did." In much of the universe "the female gender isn't as sexualized as the male gender." The clearest exposition of the book's point of view occurs in Maryville, where mourning is the only acceptable way of being. A character says, "There were moments where I hated who I was and wished I could be like everyone else. The constant urge to be joyful was exhausting to fight. I eventually couldn't do it anymore." Explaining why he became a lawyer: "I wanted to fight for gaylien rights."
Several reviewers have said that, based on the cover, they thought Planet was a children's book and were surprised by the "adult" moments. For example, the Queen of the Cosmos has a, shall we say, unusual way of displaying her power, and we learn that Orion doesn't have a belt but a penis. Not to mention the occasional fuck (pardon me, fuq).
Apart from the obvious advice on how not to judge a book: seriously, folks, it's 2020, an annus horribilis if ever there was one. Since this book was published early in the year, I can only think that Quatro must have literally bought some time, as can be done in his alternate world, saw the future and gave us this gift of a book. We need it now more than ever.

Phyllida at her desk