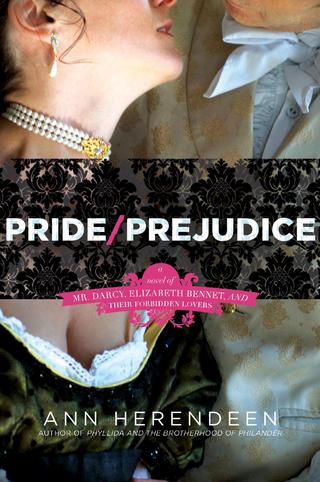 Reading from P/P at Bluestockings

A Pride and Prejudice for the twenty-first century.

Jane Austen's most popular novel has enthralled generations of readers, as proud Mr. Darcy meets his match in witty and prejudiced Elizabeth Bennet. But only now can the hidden story be told, of the two parallel loves that complicate this ideal romance: Darcy's controlling affection for the gentlemanlike Charles Bingley; and the sympathetic intimacy between Elizabeth and her more practical friend, Charlotte Lucas.

Pride/Prejudice "fills the gaps" in Austen's story, daring to imagine the full truth suggested by the original. What is Darcy's real motivation for preventing Bingley's marriage to Elizabeth's beautiful and virtuous sister Jane? How can Darcy reconcile his desire for Elizabeth with his determination to save his friend from a similar entanglement? And what is the disturbing history behind Darcy's tortured relationship with his foster brother, George Wickham?

Now P/P brings to light all the buried secrets, weaving a tale of intertwined passions that must be resolved through honesty and forgiveness, the humbling of pride and freedom from prejudice.

In this retelling of a classic work, love truly conquers all.

Brigitte Weeks in the Washington Post says P/P "breaks open a new genre of Austen-based fiction" and that "Janeites will not be pleased, but Oscar Wilde might have welcomed such a transfiguration."

Laura Miller on "http://www.salon1999.com/books/laura_miller/2010/01/20/jane_austen/index.html">Salon says "Herendeen does a better job than most of approximating Austen's style without aping it."

Pink Magazine calls P/P "a haughtily naughty same-sex twist" on Austen's story, "told in comparable English ... and leading up to a crux of of 19th century bisexuality that teases and tantalizes." (Page forward in the PDF to the "PinkPicks Entertainment" page).

Reviewer TJ Jarboe of Instinct Magazine gives P/P four out of five round red thingys and says "the intensely graphic sexual scenes described between Darcy and Bingley, Elizabeth and Charlotte and even Wickham, in several gay encounters, make for a rousing read!"

Roza of Night Owl Reviews gives P/P 4.75 out of 5 stars, a Reviewer Top Pick and says: "This is probably one of the best fan fics I've read in a long time. Everything that happened in the original but just happened off-screen (-page) happens here. If it was hinted at by Austen and glossed over for whatever reason, it's explicit here. And the best part is that it still sounds like Austen, still uses language like Austen."

Lototy, on Coffee Time Romance calls P/P a "most scintillating read" and adds, "Darcy and Charles's characters are brought to life, and their relationship bears all the earmarks of a great male love story. But then you add in the ladies, Elizabeth and Jane, and you have a tangled web of sweetness, seduction, and secrets that will keep you thoroughly spellbound. Their nineteenth century propriety is a veil to a whole host of lusty liaisons, ebullient emotions, and fierce intelligence sure to titillate anyone's secret desires."

Valerie, on Love Romances and More gives P/P four hearts, saying, "Ms. Herendeen has written a compelling, sexual and realistic story that I enjoyed and I believe others will too," and that "she tells the story beautifully."

--Pam Rosenthal, RITA Award-winning author of The Edge of Impropriety

--Sandra Kitt, national bestselling author of Close Encounters and For All We Know

"Audacious and masterful, Pride/Prejudice is an exploration both sympathetic and daring of the intimate lives of Jane Austen's immortal characters. True to Austen's spirit, Ann Herendeen has given us a compelling, and sexual, novel of manners. In scenes that illuminate the motives and intellects of our favorite characters, we witness their most private moments. Delectable"

--Pamela Regis, author of A Natural History of the Romance Novel